Feldenkrais Method® of Somatic Education as a Tool for Developing Emotional Expression and Portrayal with Actors (and non-actors, too)

Originally published in the February 2020 issue of In Touch, a publication of the Feldenkrais Guild of North America. Re-published here for our audiences by permission.

Theatrical artistic director and teacher Odette Guimond uses the Feldenkrais Method® of somatic education and The Emotional Body® to help actors to refine their craft as expressive artists. We asked Odette to share her experience with our community in In Touch

IT: How has the Feldenkrais Method influenced your work with actors and emotional expression?

OG:I have always been interested in neutrality and emotional mobility in my own life and as an actor and teacher. The Feldenkrais Method influenced my work with actors since 1979, including emotional expression.

While working on my doctoral dissertation in theatre aesthetics (L’acteur et le corps apparent -1987), I was pursuing research in my centre and theatre company, inviting different practitioners in the somatic field. I was curious to explore how these methods could join the actor’s creative process.

As a professional, I was amazed at that time to discover that, in the Western Hemisphere, movement and actors were considered from a disembodied and totally external point of view. When I discovered Maturana and Varela’s concept of autopoiesis, I finally had the basis to develop something else.

During my Feldenkrais® training with Anat Baniel (New-York,1991), I began to include some Awareness Through Movement® lessons within the process of my theatre company productions. I then elaborated a program for professional actors and founded AUTOPOÏÉSIS, école d’art Feldenkrais in 1995. I presented my approach at the UNESCO Chair (International Theatre Institute) from 1999 to 2005. The workshops I gave and demonstrations with my students were highly appreciated as original and effective, and won international recognition.

OG:No, it’s not, except they have a lot of experience about their voice and bodies and are sensitive, receptive and trained to observe a lot about what is going on in themselves. So in a way it is a gift.  As anyone else, they generally come to the Feldenkrais Method because they are suffering in their bodies. And as actors, it is not permitted. A Feldenkrais teacher might consider that an actor will come later in their life… or after big injuries. The life of an actor is stressful and performance-based in a very judgemental context. They are generally poor and have also to do many things do earn a living, working really hard.

OG:Emotion is at the heart of the creative process of an actor. If “emotional intelligence” means the ability to move fluently and easily through emotions, then without emotional movement, there would be no resonance between humans: only disembodied ideas and dehumanized movements and actions. Emotion is essential to relate to the public and to work with partners within a collective of creators. At the least, an actor is responsible for the creation of one character on stage, and to touch the audience.

IT: How have you found the FM to help an actor make more intelligent emotional choices – both in preparation for a role, and in the moment?

OG:I use Functional Integration® lessons with an actor as part of an improvisation or a coaching process for a role. We then observe together how it may change and clarify the intentions, the intuitions or the quality of the performance. With groups, I choose Awareness Through Movement lessons related to themes that support  improvisation and the rehearsal process. The themes are Presence, The Creative Process, Character, and Performance.

IT: Generally speaking, what kinds of lessons have you found to help actors to embody these themes?

OG:The ATM® lessons about Presence explore Turning around the Axis, Neutrality, and Verticality.. The sub-theme is “The Art of Presence and Action.”

For the Creative Process, I use Turning around the Centre and lessons with a lot of constraints. The sub-theme is “Creative Process and Individual Preferences.” The objective here is for the actor to become aware of their major patterns, and use them creatively; instead of wanting to correct them out of a judgmental attitude. Also to appreciate that other people may make different choices!

For Character, a lot of breathing-based lessons, the use of the diaphragm and building patterns. I refer to Thomas Hanna, Stanley Keleman and others who give us modern types and archetypes of behaviour in walking and relating, which we can study for our characters. The sub-theme is “Characters and Neuro-motor Patterns.” In theatre, characters do not always behave in healthy patterns, and we have to be able to get in and out of patterns we choose to build and master.

For Performance, again Neutrality and Breathing.The sub-theme is “The Art of Autonomy and Interdependence”. For Performance, the central point is coming in and out of neutrality, of our own preferences to get in and out of the character’s own trajectory. And, at the same time, staying connected with partners with whom we have made our choices, built the ensemble, living the present experience, including the public resonance.

So, Turning around the Axis, Turning around the Centre, all the Clock lessons, Diaphragm and Breathing lessons are recommended. Voice and jaw lessons…Lessons on a chair, also as for everybody…Go between very sensitive and tranquil lessons and very dynamic ones…Simple and complex functions…

IT: Those are rich and potent themes and sub-themes. They inspire imagination and expression! What advice might you give to Feldenkrais colleagues who are working with actors, or wish to?

OG:In my experience, I find that it is often difficult for actors to link the strange experiences in ATM with the way they are generally trained. It depends on the context and their level of experience both in life and in their art. Feldenkrais lessons don’t work when imposed as a course in their actor’s training. When they are older and want to enhance their creativity as artists, It depends a lot on the way they were initially trained. The best opening is to ask them what they are interested in. My experience is also that they can be resistant to people who don’t themselves have experience as actors. Sometimes, they are more interested in a dance-like approach, because they consider their bodies as instruments; in some way disconnected from voice, emotions, text, psychology or daily human behaviour. This disconnection may happen when they were not trained in a somatic approach of theatre.”

IT: How do you help actors move in and out of emotions?

OG:Emotions are not personal, they are relational. Emotions are embodied in our self image and in the image we are building of the character. Moving in and out of emotions is a strange metaphor. As if emotions were out of ourselves or enslaving us from inside. It has nothing to do with reality. We can learn to observe ourselves and situations from inside and from outside. We move in and out of relationships, of situations.

In fact, we are always at least integrating three facets of ourselves on stage. To be there first as a person (with our life experiences), then as an actor (an expert in action, integrating a lot of skills) and finally as a character (words and stories in the movement of a text written by another human being we have to listen to and let resonate in our own self). We have to be able to switch our attention at any time. Including stepping in and out of any pattern. I help actors to better differentiate what they are doing within this process. The quality of attention and differentiation is important for a better character integration and a safe preservation of one’s ongoing learning process as an actor and a person.

IT: How do you imagine non-actors might learn about emotional expression through the Feldenkrais Method?

OG:Learning about emotional expression is a question of paying attention and developing our inner observer through experience and interest about something we never considered as part of the elusive obvious movement of life.

I think the main problem for human beings, now more than ever, is to confuse intention with emotion. Cross-motivation comes when the intention is confused, but also when the emotion (which is functional) is not supporting the action we are doing. What is our intention, receiving or giving a lesson? Is it really learning? What are our emotions about?

Emotions express our basic needs to other people and in an inner feedback loop, inform ourselves about those basic needs.As Moshe said, once we know what we are doing, we can do what we want. When we become aware of the way we learn, we may become aware of our real needs. We may discover that we have habits that compel us to move a different way than we intend or believe we are asked to move. Habits of moving and learning with anger, fear or sadness may appear during the process. In each lesson, we are reminded again and again to use our basic needs of love, tenderness and joy to learn healthy ways to move.

IT: Can you talk a bit about how the Feldenkrais Method and The Emotional Body® work influence and support each other?

OG:Emotions are ever-present in the quality of our breathing, our muscle tone, our habits, our facial expressions. The Feldenkrais Method is about the education of the inner observer and the quality of the concentration we develop in an awareness mode to learn freedom and humanity.

Through a better use of the gravitational field, we learn the art to come back any time to neutrality and verticality (our potent self), enhance our sensitivity and clarify our intentions, so our actions are reflecting them.

As we are also obviously emotional bodies with functional patterns, we can learn to differentiate them from our intentions in action. It is important for our survival to learn safe ways to use the patterns related to anger, fear, and sadness. The Emotional Body work helps one learn, from a place of neutrality, to recognize emotional patterns, master them, and move safely from one to another. It is a gift that The Emotional Body offers to the Feldenkrais Method. Neutrality is mobility, and mobility is emotional.

Odette Guimond (Emotional Body Instructor) is a theatre woman and somatic educator, born in Montreal. Actor, director, artistic and pedagogical director of AUTOPOIESIS, école d’art Feldenkrais, she dedicates herself to the somatic education of the actor. She is also artistic and general director of the Réverbère Théâtre, where she produces creations in resonance with this artistic vision. She is pursuing her learning and teaching with the general public at Centre d’éducation somatique du Plateau. You can see (and hear) more of Odette at the upcoming online Feldenkrais Summit in May 2020. She is a Member of L’Association Feldenkrais Québec. The AFQ is mandated to represent the FGNA in Quebec and is part of the International Feldenkrais Federation (IFF). 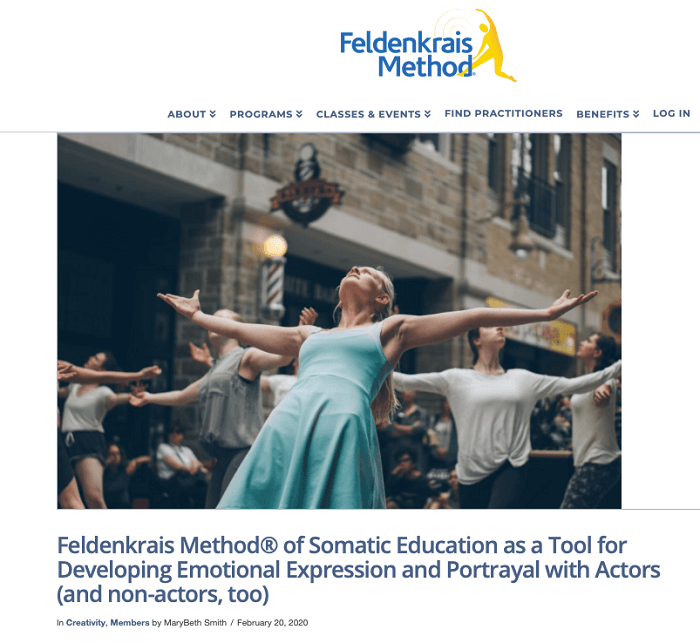