Emotional effector patterns are precise breathing and muscle manipulation patterns linked to specific emotional feelings. Each effector pattern has three parts: (1) a breathing pattern, (2) facial expression, and (3) postural attitude. All three parts work together to create one effector pattern, or biological code, that directly stimulates nerves, cells and organs. The resulting pattern works like a key that opens the door for one particular basic emotion to express throughout the entire body.

The discovery of these patterns helped to create a physical method for evoking and regulating emotion. The patterns are based on scientific findings, independent of gender or social heritage influences, and result in the expression of basic universal emotions and modes of expression.

"The emotional effector patterns stretched me beyond my limitations. By practicing the six pure emotional states, I was able to discover which states I sit in, and therefore have a broader scope when researching characters' emotional worlds. This work also freed me of the emotional struggle I put myself through to try and connect with deep and complex emotions. I can simply do the patterns and drop into the emotion without drawing on past trauma or emotional history. It has expanded my range as an actor and as a human being and given me the tools to be more in control of my emotions." ~ Sarah Mennell, Actor, Voice-Over Artist, Writer (Toronto Training, 2019)

In the initial development of the BOS Method, Bloch and her associates utilized “direct observation and by electrophysiological recording during emotional recall and reliving of emotional experiences, in normal, neurotic and hypnotized subjects” (Bloch, 2002:221). They concluded that “specific emotional feelings were linked to specific patterns of breathing, facial expression, degree of muscular tension, and postural attitudes” which, they termed “effector patterns”.  Using these effector patterns, they identified and analyzed six basic emotions.  Basic emotion, as defined by Bloch are “those types of emotional behaviors which are present in the human infant either as innate behaviors or apparent at very early stages of post-natal development” (2002:222).  Bloch contends that each of the basic emotions can be voluntarily evoked by activating, with precision, the corresponding effector pattern, which is “composed of: (1) a breathing pattern, characterized by amplitude and frequency modulation; (2) a muscular activation characterized by a set of contracting and/or relaxing groups of muscles, defined in a particular posture; (3) a facial expression characterized by the activation of different facial muscle patterns.” (2002:221).  Bloch goes on to state that as the effector patterns are voluntary, change in emotional intensity can be achieved with control through a modulation of the somatic elements, (1993) and may retain the expressive components of the emotion with very little of the subjective involvement. (2002:222).  After developing proficiency in the “basic emotion patterns” a person is then able to evoke more complex emotions such as, embarrassment, awe, pride, jealousy, by mixing somatic elements of the various effector patterns much like primary colors mix to produce new colors. (Bloch, 2002:229). In addition to the effector patterns, the BOS team added what they termed a “step-out procedure”.  The procedure, consisting of a pattern of slow, regular, and deep, breathing cycles followed by a total relaxation of the facial muscles and a relaxed and centrally aligned posture, is designed to return the person to a “neutral state” in order to fully release any previous emotional induction. (Bloch, 1993).

As a purely physical approach to emotion stimulation and regulation, the emotional effector patterns provide individuals with an efficient and effective method for developing and expanding expressive capabilities. The method helps a person learn how to fully enter and clear emotional states and move from one emotion to another with conscious control using an approach that is not tied to the use of imagination, a specific discipline or aesthetic, but one that can complement and enhance other existing techniques.

"As a physical actor, I can't imagine finding a more beneficial tool for my craft. It's given me an in-depth, embodied understanding of emotional states that has helped me reach a kind of truth and vulnerability in my work that I had felt before only on rare, special occasions. It's also helped me identify and understand the emotions I experience in my own day to day life, so I can react to situations with more confidence and control." ~ Heidi Damayo, Actor (Vancouver Training, 2019)

Emotional Body® instructors have extensive training and practice in how to teach the emotional effector patterns They have also developed workshops and courses that use different styles of teaching the emotional effector patterns to match the needs and abilities of the learner. Emotional Body courses share a foundational somatic education teaching philosophy and Instructional Understandings described in detail found on our Instructors page.

Emotional Body courses have a distinct instructional style that includes: (1) a unique language of emotional effector pattern labeling, (2) low intensity lessons when introducing the emotion patterns, (3) and somatic sensing lessons. The courses also use our signature text, The Emotional Body, which includes lessons on recent emotion research, emotional fluency and literacy, and physical and vocal expression development. Emotional Body instructors have a clear understanding of the distinctions between, and philosophies behind, the various instructional methods used in their courses, and they clearly identify them in their practice. 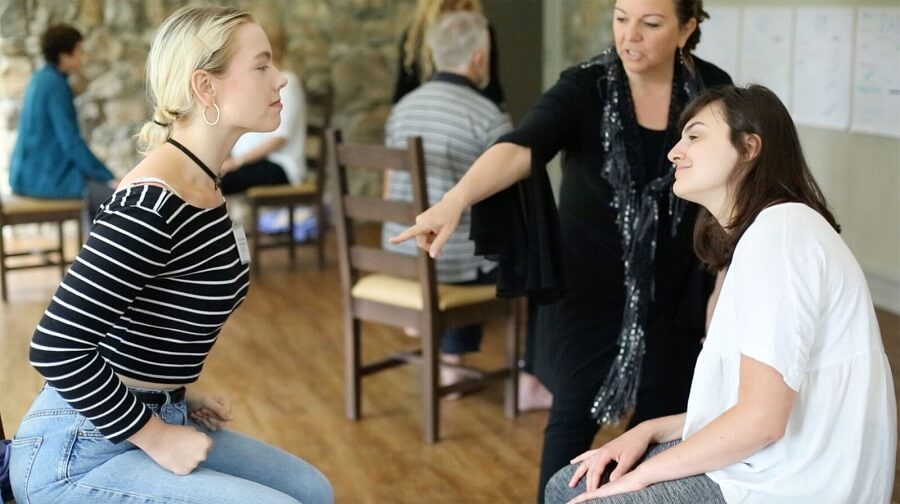